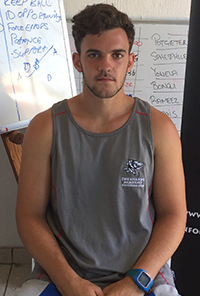 Hi,
My name is Finlay Conway. I am 18 years old and I am currently in South Africa attending the sharks academy 2018. I wash born in a town called Keighley in the North of England. I lived there with my Mum, Dad, younger sister and older brother for 7 years before moving to France in 2007. I’ve been living in South West France, not far from Bordeaux for the past 11 years. I live in a beautiful little medieval village called Duras, I highly recommend visiting the place if you have the opportunity to visit that region of France.

Rugby has always been a part of my life, whatever country I have been in. I have now been living in the South Coast KZN for a month. Time is flying. Sandille Nxumalo, an ex-Shark now playing in my club back home (Union Sportive Marmandaise) gave me the opportunity to join the Sharks Academy last July. He is a good friend of the manager of the Academy; Andrew Binikos and had seen me play during practices. He was in contact with Andrew on my regards and then asked me what I thought about joining the Academy. He then got me in contact with coach Andrew to sort things out.
So that’s how it all started off. I had by that time finished my A levels so I got working straight away to help finance my year here. I worked in a couple of different companies, mainly a roofing business and an agricultural company. I worked from July to December, had a couple of weeks off in January and then came here. On my arrival I was very kindly greeted by Andrew, and shortly after, his family. After that Andrew took me to meet Mr Dougie Harlambous; the president of the academy and of South Coast rugby. I am currently living at his house with 4 other guys from the Academy who arrived a few days later than me.
I had a couple off days to get settled in and sort things out and then the hard work started. On January 30th we went on a three day integration and physical preparation camp at Lake Eland. It is a beautiful place, full off amazing wildlife and scenery and some fun activities. But as we all know, there is no fun without hard work….
On our arrival at Lake Eland, we first had to run to camp before doing anything. It was an 8km run through the mountains in some seriously hot weather and difficult landscapes. It was probably the most challenging thing I have ever done. Once we arrived at camp, we ate and then it started again, hill sprints, stair climbing, murphee challenge, boxing, mini rugby tournaments and so on for the next three days. It was an amazing and extremely challenging, both mentally (mainly when the coaches wake you up at 4:30 am with a horn and banging on the doors to go running even though the day before that you never stopped) and physically.
Once we got back home, we were all very happy for a long weekends rest. On the following Monday, the normal days started. Gym everyday at 6am where head coach at the academy; Jason Hector doesn’t hesitate to drill us and drain our bodies of every bit of energy we have left. Then an hour or two’s rest, followed by conditioning field running, then an hours rest before skills training and general rugby play. We usually finish training around 1 o’clock and then go to One Eyed Jacks for lunch. At the moment we have the afternoon off before club training but from the first of march, academics start so we can forget that luxury… Twice to three times a week we also have club training at 6pm with South Coast Warriors Under 20’s squad.
After that, the day is over, it’s time for a big meal and a long sleep before it starts again the next day. In our free time, we just chill out and rest, we spend time with one another, go down to the beach and basically just be lads. I’m trying to learn a little Afrikaans but I must say, after learning French and Spanish, it seems like an extremely difficult language to master. On weekends, I often think about how I would like to spend some quality time back home with my family, because even though it’s amazing out here, living away from them is not always a bed of roses. But the lads are always there to put a smile on a teammates face if he’s feeling a bit low, so we all hang out together and then head out to the local bars and clubs for a lads night out.
Next week we are moving in to a big mansion nearby; where we will all be living together, it’s a lovely place and i’m sure we’re gonna have some fun times ahead of us. We will have our own gym there so I know what i’m going to be doing in my spare time!
To finish off, i’m only a month into training but I love it. I highly recommend the academy to any young man looking. 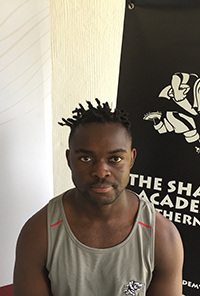 My name is Keith Tanatswa Chiwara. I am currently attending the Sharks Academy SKZN. I am 18 years old and I play fullback/outside centre.
I was born in Harare, Zimbabwe, where I did my education up until grade 4 before we moved to Cape Town.
In Cape Town I attended both Brackenfell Primary and high school.

This is where I developed my passion for rugby. I started playing rugby at the age of eleven and I have been in love with the game ever since. By the time I got to High School I started to realise that rugby was not just a hooligans game and that there was much more to the sport than what us youngsters see on the television.
When I think about the differences between School rugby and what I am learning at the Academy right now, personally High School rugby was all about brotherhood, building friendships, gaining respect, protecting your dignity and last but not least bragging rights. Since I joined the Academy I realised that one never stops learning. I feel I have upped the game by joining the Academy, the setup is completely different from school rugby, as opposed to training three times a week, we now train three times a day everyday of the week.
At the Academy we have gym programmes designed for each of us and our specific positions, we are given one on one training with individual attention to ensure that every player performs to the best of their abilities.
The main difference between the Academy and high school is that here at the Academy every individual wants to make rugby their career and we are all very passionate and dedicated about the sport.
Based on my personal experiences at both school rugby and the Academy, instead of practising to win games, we now practise to become better players on the field and off the field.